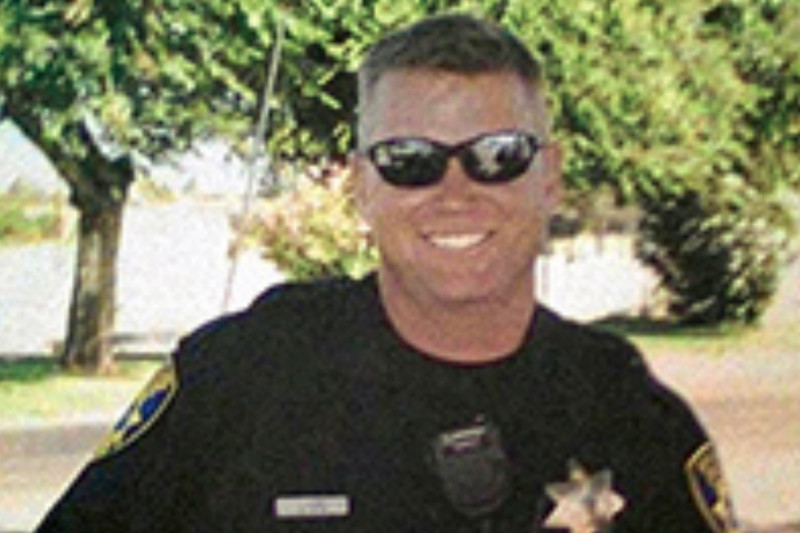 Today we remember the sacrifice Vallejo Police Officer James Capoot made while serving and protecting the safety of the residents of Vallejo.  Jim was murdered by a bank robber he was chasing in 2011.  That criminal was ultimately arrested and convicted.  Please take a moment to reflect on Jim’s life and his family today, as well all the other officers that have been killed in the service to their community.

A writing from one of our members:

For our new hires who did not have the privilege of knowing Jim, he was an amazing person whose life was an inspiration for us all.

The sea of officers depicted in the photo sat in complete awe of the various testimonies about how Jim touched the lives of so many.  Thousands of officers including me, asked themselves...have I done enough?  It's crazy how 11 years later I still ask myself the same question.  I will never forget 11/17/11.

I will never forget you Jim and I value knowing you.  For the few of us still here who lived through those days when Jim was killed, we understand what it means to wear this badge regardless of our critics.  Stay strong and be proud of who you are and the honor bestowed upon us to be that light in the dark corners of society.

Jim Capoot began his law enforcement career with the California Highway Patrol in 1990.  In 1992 he left the CHP to become a Police Officer for the City of Vallejo.  Over the course of his career, Jim served as a motorcycle officer, motorcycle instructor, driving instructor, force options instructor, and SWAT officer.  He received two Vallejo Police Department Medals of Courage, two Life-Saving Medals, and various other Departmental commendations.  Before beginning his career in law enforcement, Jim served our country in the United States Marine Corps.  He was stationed at Mare Island, right here in the City of Vallejo.  He truly loved this city and he loved the people in this city.  It’s imperative we continue to serve with integrity, honor, and courage.  By doing so, we are honoring his sacrifice and keeping our patch strong for all to know Jim is a part of a very unique and special Police Department that is second to none.  We are lions and will never be sheep.

Proverbs 28:1
The wicked flee though no one pursues, but the righteous are as bold as a lion.
(This bible verse was on the t-shirt Jim was wearing when he was killed)