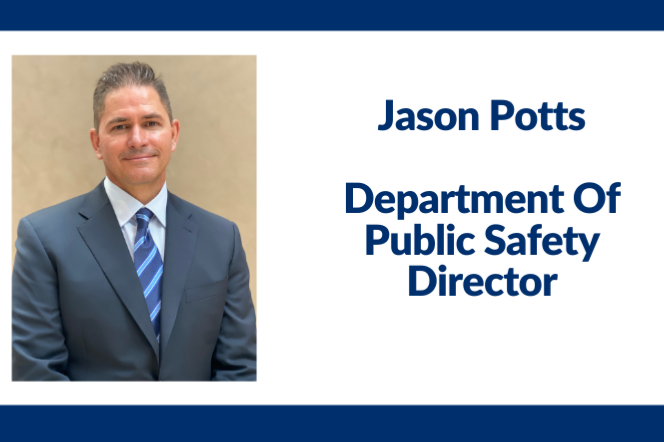 The Vallejo Police Officers’ Association sadly announces the resignation of Captain Jason Potts. Jason resigned to take a position as the Director of Public Safety for the City of Las Vegas. He started his law enforcement career with the U.S. Customs and Border Protection as a border patrol agent. After several years, Jason joined the Vallejo Police Department where he has served his home town for over 22 years. Simultaneously, he also serves as a military reserve special agent with the Coast Guard Investigative Service.

Jason has a Master’s degree in Criminology, Law, and Society and a Bachelor’s degree in Management. He holds a certificate of completion from the Police Executive Research Forum, Senior Management Institute of Police. He is a graduate of the California POST Command College, and is a National Institute of Justice (NIJ) Law Enforcement Advancing Data and Science Program alumni with the U.S. Department of Justice. Potts sits on the Executive Board for the American Society of Evidence-Based Policing, is a member of the Council on Criminal Justice, and is a National Policing Institute fellow.

The departure of Captain Potts is a tremendous loss to the city of Vallejo and the Vallejo Police Department. The departure of Captain Potts leaves three vacant captain positions within the department as well as multiple lieutenant positions. Two potential lieutenants remain on the promotional list created in December 2020 but Shawny Williams has refused to fill these vacant positions.

Along with Potts, and the recent departure of former Lieutenant Fabio Rodriguez (now a Captain for the Napa Police Department), the departure of tenured command staff; homegrown Vallejo products; is utterly without precedent within the history of the Vallejo Police Department. Shawny does not appear to be someone who values the officers of the VPD, the sacrifices made, experience gained, dedication shown – that is documented in exit interviews that used to be conducted (a practice Williams eliminated).

The VPOA is extremely concerned with the loss of command staff under Chief Shawny Williams and his failure to fill these positions despite repeated calls for active supervision and officer accountability. Unfortunately, the VPOA has been forced to initiate legal action once again against Williams to ensure he keeps his word and fills the vacant command staff positions to ensure proper and efficient operations of the police department.

All of this aside, the Vallejo Police Officers’ Association wishes Chief Jason Potts success in his new position and knows the City of Las Vegas is extremely lucky to have him lead their Department of Public Safety.

The Vallejo Police Officers’ Association (VPOA) was incorporated in 1957. The VPOA is the recognized bargaining unit between all Vallejo Police Officers and the City of Vallejo.  Members include all ranks of officers – Captains, Lieutenants, Sergeants, Corporals and Officers.  The VPOA does not represent the Chief of Police or the Deputy Police Chiefs.  The business function of the VPOA is to protect the collective interests of the members of the Vallejo Police Department and provide benefits to its members. The VPOA is also committed to the safetyand security of the citizens of Vallejo and the protection of life and property.