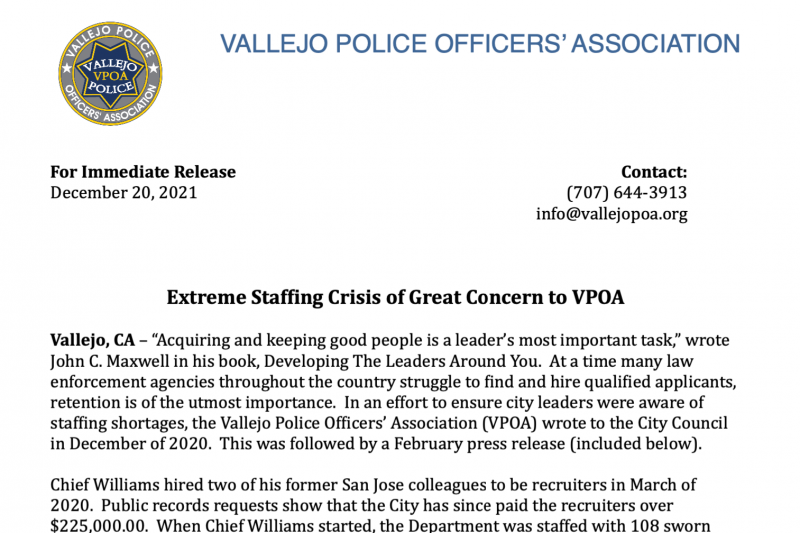 Vallejo, CA – “Acquiring and keeping good people is a leader’s most important task,” wrote John C. Maxwell in his book, Developing The Leaders Around You. At a time many law enforcement agencies throughout the country struggle to find and hire qualified applicants, retention is of the utmost importance. In an effort to ensure city leaders were aware of staffing shortages, the Vallejo Police Officers’ Association (VPOA) wrote to the City Council in December of 2020. This was followed by a February press release (included below).

Chief Williams hired two of his former San Jose colleagues to be recruiters in March of 2020. Public records requests show that the City has since paid the recruiters over $225,000.00. When Chief Williams started, the Department was staffed with 108 sworn members. Currently, the Vallejo Police Department is down to 87 sworn police officers plus the Chief and Deputy Chief. However, 25% of those officers are injured and unable to work the streets. This equates to 65 working police officers - or .5 per 1,000 population; or 1 officer for every 2,000 residents. This is dangerously below the average 2.34 per 1,000 population across agencies in the Sate of California. The problem is extremely apparent in Vallejo when trying to fill 8 police beats, on 3 shifts a day, 7 days a week, 365 days a year - all while trying to manage sick, vacation and training days - in the Patrol Division alone!

Currently there are 4 more Vallejo police officers in the process to be hired at neighboring Bay Area agencies and several others close to retirement. This failure by Chief Williams to recruit and retain employees is causing dangerous working conditions for Vallejo police officers. Additionally this failure has reduced the quality of services and increased danger to the citizens of Vallejo.

On most days, the Department struggles to reach minimum staffing levels. The Vallejo Police Officers’ Association wants to provide the best possible services to the citizens of Vallejo as well as ensure the safety and wellbeing of our members. We encourage everyone to contact Chief Williams and your City Council members to demand accountability. The only way the Police Department can make needed improvements, provide better services, and ensure the safety of our members, citizens and community, is to change course.

The VPOA does not represent the Chief of Police or the two Deputy Police Chiefs.

The business function of the VPOA is to protect the collective interests of the members of the Vallejo Police Department and provide benefits to its members. The VPOA is also committed to the safety and security of the citizens of Vallejo and the protection of life and property.