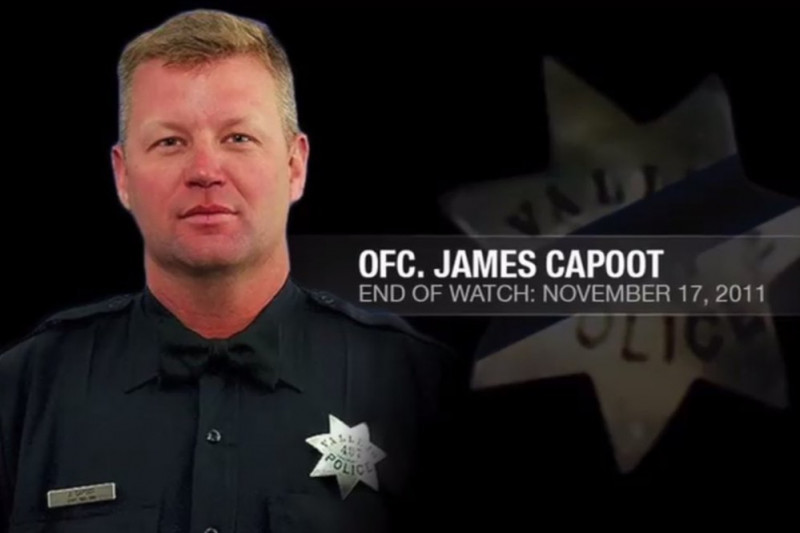 Today marks ten long years since the murder of Officer James L. Capoot in the line of duty. Officer Capoot was killed by a bank robber who Jim was attempting to apprehend. Officer Capoot responded to a report of a bank robbery on the east side of Vallejo. He observed a subject matching the description and gave chase. After a car and foot chase that ended in north Vallejo, the bank robber shot and killed Officer Capoot in the rear yard of a residence. The robber was later taken into custody and ultimately convicted.

Many of the officers that were working that day are still employed by the Vallejo Police Department. We hope this serves as a reminder to all that the safety and security of our residents, business people, visitors and our police officers is our only priority. Countless lives were changed that day and many memorable events have taken place since - graduations, weddings, births, and deaths to name a few. Events that Jim and his family could not share together.

Please take a moment to watch the video linked below. Please think about Jim and his family so that his memory, his sacrifice and his dedication to the City of Vallejo will never be forgotten.

Last week, the Vallejo City Council approved the renaming of a street on Mare Island in Jim’s honor. The street was selected for two reasons; it intersects Azuar Street (another Vallejo officer killed in the line of duty) and it borders the Marine Corps barracks that Jim and other Vallejo police officers lived in while stationed at Mare Island when it was an active base. A street dedication ceremony is being planned for the Spring and we will share details when they are finalized.