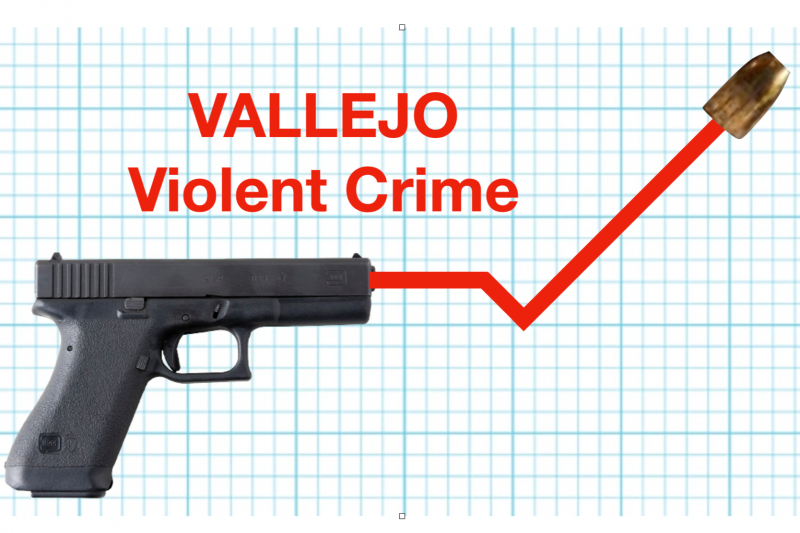 The FBI’s Universal Crime Reporting (UCR) data shows in 2020 the City of Vallejo experienced a surge in violent crime not seen in over 20 years.  There are four crimes counted by the FBI’s UCR data for violent crime: homicide, rape, robbery, and aggravated assault.  This upward trend has continued through 2021 and into 2022, although final data from the FBI is not yet available.

The Vallejo Police Officers’ Association (VPOA) feels that the true story of what is happening at the Vallejo Police Department needs to be told. Chief Williams has been unable to effectively implement “21st Century Policing” strategies and therefore surging violence is endangering Vallejo citizens and members of the VPD.  Chief Williams’ poor fiscal choices, vindictiveness towards subordinates, unfair labor practices, inability to make vital decisions, and lack of transparency has caused a mass exodus from the department and subsequent critical staffing shortages.  It is a fact that the inability to attract, much less retain officers is putting citizens and officers of Vallejo at risk.  This unstable, and often negligent, leadership has been reported to past and current city leadership with no action. The members of the Department’s Police Association are now calling for the public to ask questions and seek answers.  Just as members of VPOA must be held accountable, so do organizational leaders.

To date in 2022, there has already been nearly 100 shootings with over 40 people shot in the city of Vallejo.  Year-to-date, Vallejo has had 10 murders - on track to be one of the deadliest years in decades.  From surging violent crime to his revolving door of command staff, or everyday quality of life issues effecting Vallejoans, Chief Williams has stood by and mislead the community into thinking he is effecting change and improving the department.  That could not be further from the truth. Chief Williams’ reckless leadership is jeopardizing the safety of our members and the citizens of Vallejo with his inabilities.

Members of all ranks cautioned Chief Williams when he started in 2019 that staffing should be his main priority.  Unfortunately, the VPOA’s projection to the chief and city council that a failed recruitment and retention plan would lead to dangerous conditions was disregarded.  The VPOA even offered to match a lateral hiring bonus to help recruit veteran officers from other departments, which was also snubbed.  The damage to the Police Department’s workforce has been done and will take years to recover from.  When is enough…..enough?

The VPOA will continue to expose the game of illusions being played by the Chief of Police and strongly urges members of our community to inform themselves and demand improvements in leadership at the Vallejo Police Department.

Members include all ranks of officers – Captains, Lieutenants, Sergeants, Corporals and Officers.

The VPOA does not represent the Chief of Police or the Deputy Police Chiefs.

The business function of the VPOA is to protect the collective interests of the members of the Vallejo Police Department and provide benefits to its members. The VPOA is also committed to the safety

and security of the citizens of Vallejo and the protection of life and property.