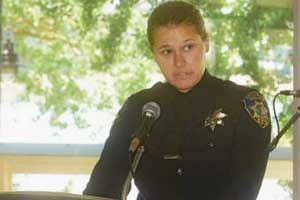 In high school, Jodi Brown had a choice: Stay with her abusive uncle and brother, or return to the foster care system in which she had already spent many years.

For Brown, the decision was easy, and she picked up the phone and called her social worker to ask for a placement in a group home.

"I told her I'd rather be there than be with my family," Brown said Saturday during a fundraising luncheon for Foster Greatness, a Vallejo-based program aimed at building support structures around vulnerable foster youth — just like Brown had been.

Introducing brown, Foster Greatness founder Sandra Vegas said it was important to highlight successes like Brown in order to inspire and give current foster youth hope.

Brown, now a Vallejo police officer, recalled living with a schizophrenic and drug-addicted mother and her two older half-brothers before they were taken away by child protective services. One brother went to live with his father in San Jose; Brown and her other brother ended up with their grandparents in Manteca.

Unfortunately, the situation continued to be untenable for Brown, as her grandmother was an alcoholic and her grandfather abusive.

"Police were called to our house often," Brown said, adding that she and her brother also acted out.

Eventually, both siblings were placed in group homes before moving in with an uncle in Phoenix. Though Brown devoted herself to school to keep herself out of trouble, her brother dropped out. She found a mentor in her JRTOC instructor and kept the memory of an uncle who had died in Vietnam as an inspiration. She even managed to keep herself fed and safe, even when her uncle and brother would disappear for weeks for business trips.

"I slept with a knife under my pillow on a futon in the front room," Brown said of her fear of being alone.

Then one day, the two returned and demanded she come back with them to a rural town, where other members of her family lived — members who were addicted to methamphetamine. Afraid of the lure of addiction, Brown called her social worker and asked for the group home.

After the group home, Brown returned to California to live with another set of aunts and uncles who charged her $400 a month for rent.

The state of Arizona gave Brown a $500 monthly stipend. An argument between a 19-year-old Brown and her aunt led to her expulsion from the house. She stayed with friends until she was able to graduate and join the Air Force.

Brown spent six years in active duty and remains in the Air Force reserve. She credits the service for giving her discipline and allowing her to get her life together in order to pursue her dream of being a police officer.

"Find something you love to do — anything to keep you motivated to succeed and away from the street," Brown said.

Brown followed speaker Mia Styles, a Vallejo resident and former foster youth who got pregnant at 13. Fearful that her own child would be taken away, Styles asked a judge for emancipation.

"By the age of 13, I was working two jobs, renting an apartment, taking care of my baby and going to high school," Styles said.

Styles son, 21, is pursuing a career as a firefighter, and Styles herself has started a business based on her family's jerky recipe.

"I'm an example of what people can grow into," Styles said.