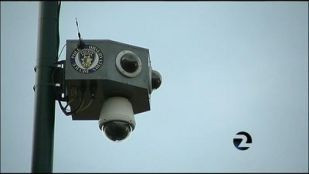 The Vallejo Police Department launched a new program Wednesday called Project V-Cam, which they say could give them better access to private surveillance cameras to help solve crimes.

The project asks residents and businesses with private cameras to partner with police and register their cameras with the department.

"Our goal with that is to catalog and know where all the privately owned cameras are throughout Vallejo," said Captain James O'Connell, of the Vallejo Police Department.

Vallejo Police aim to create a citywide map so officers can know where to look for surveillance footage near a crime scene.

The City of Vallejo has more than 30 cameras in crime hot spots. Police are hoping to expand that with Project V-Cam.

"It's entirely voluntary, if people don't want to participate, there's no obligation to participate and we absolutely respect that," O'Connell told KTVU Wednesday.

Police say the number of private cameras is on the rise. Participation in Project V-Cam would be voluntary. Police would not have direct access to the private cameras and would have to ask the owner to view any footage. Information about the registered participants would not be shared with the public or the media.

One family told KTVU thieves recently stole computer tablets from their home and they are considering getting a surveillance camera. They liked the idea of Project V-Cam.

"There's a lot of crime going around and it's not safe, so I think it's good," said Nicholas Nicholas of Vallejo.

Vallejo's Mayor Osby Davis says Project V-Cam is about partnering with the public and is just one step to help a police force that shrank in numbers during the city's bankruptcy.

"We will be probably up to 100 officers at the end of June," the mayor told KTVU.

Davis said that would be 20 officers more than Vallejo Police had 8 months ago. He also told KTVU he is working on another plan to require surveillance cameras at some businesses.

"To have businesses in our community that take cash have cameras in their premises, so that it may be a deterrent to people who rob places," the mayor told KTVU.

The owner of Momo's Cafe in downtown Vallejo is hopeful Project V-Cam will help reduce crime.

"It's actually gotten better compared to what it was before," said Manny Melendrez, "If there's a crime that's going on, it should be solved you know, I think it's for the better to better the city."

Project V-Cam launched at 2 p.m. Wednesday 4/30 and by 6 p.m. five people had already signed up and registered their cameras. Parties interested in signing up for the program can get more information at the city of Vallejo website.