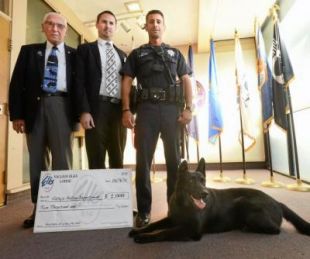 The Vallejo Police Department received a $2,000 donation Wednesday to be added to the pool of funds to purchase a new police dog

The donation was made by the Vallejo Elks Lodge through a grant from the Elks National Foundation, which is a fraternal order and charitable foundation.

"We feel like in our community there's too much negative, and we want to bring more positive," past president Ed Malone said. "We'd like to boost up the police department."

Malone and another member wrote the $2,000 grant proposal, which is the maximum amount that could be requested.

Vallejo police Officer Peppino Messina, with his K-9 partner Jaeger, were at the Elks Lodge to receive the check. Messina said this is the first big community donation the department ever received to purchase a police dog. A new K-9 costs about $10,000 to purchase and train, he added.

The department is seeking two new police dogs to replace the two that are retiring in the next few months, including Jaeger who is 8.5 years old and has served the department for about 6.5 years. Messina said the length of service for a K-9 depends on the individual dog. The department currently has six police dogs, one to serve each shift in a week.

The Vallejo Elks Lodge regularly contributes to the community through its scholarship programs and other events. It also contributed to the fund to name a portion of State Route 37 in Vallejo in honor of fallen Officer Jim Capoot.

Photo: The Vallejo Elks Lodge No. 559, represented by Past Exalted Ruler Ed Malone, left, and Exalted Ruler Mike Smith, center, present a donation of 2,000 Wednesday to Vallejo police Officer Peppino Messina and his K-9 partner, Jaeger. The check was a contribution to a fund for acquiring two new dogs to replace Jaeger and one other dog as the two approach the end of their service with the department. (MIKE JORY — VALLEJO TIMES-HERALD)