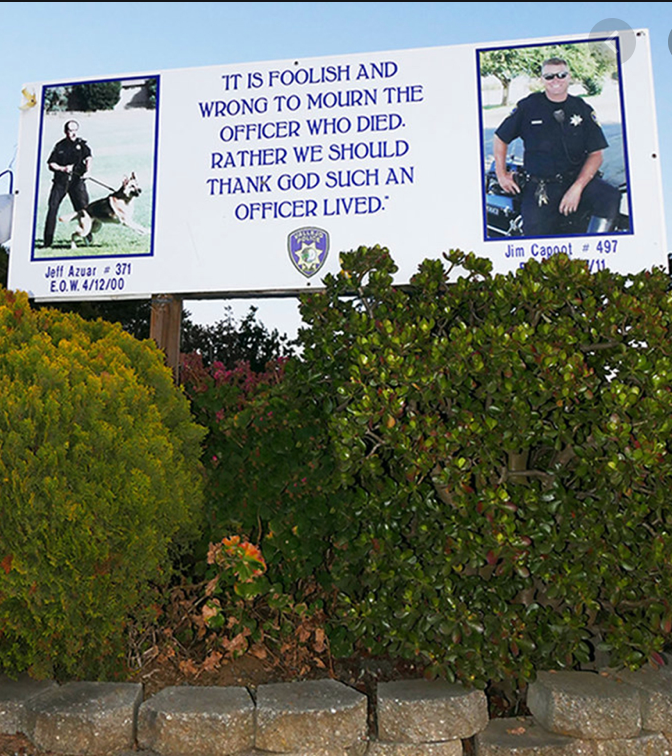 “Destroying a memorial that honors the dead is truly despicable and disgusting. It is also hateful, disgraceful and cowardly. It is wrong that attacks on police, living and dead, are allowed to occur without consequence. It’s time for all violence to stop,” said Lieutenant Michael Nichelini, president of the VPOA.

The memorial was comprised of large signs and photographs of Officer Jeffrey Azuar and Officer James Capoot. The signs and photos were smashed and broken into pieces in the 200 block of Rollingwood Drive, where it had recognized their bravery and sacrifice for Vallejo. The damage was discovered this past Thursday.

“These heroes sacrificed their lives attempting to apprehend violent criminals,” Nichelini said. “It is heartbreaking that someone--or a group of people--would damage a community memorial that recognized and honored the ultimate sacrifice made by these two VPD officers.”

Nichelini pledged the VPOA’s assistance and funds to rebuild the memorial. He said he trusts the leadership of the Vallejo Police Department will also devote resources to apprehend the perpetrators.

“We do not know who originally created this sign, but we are working with community and business members to restore it. We will donate the time and money to see that it is replaced and stands as a reminder of the heroism of Officer Azuar and Officer Capoot,” he added.

Officer Jeffrey Azuar was shot and killed after he and another officer attempted to serve a failure to appear warrant on a suspect on April 12, 2000. The officers found the suspect hiding in a garage of the residence. The suspect began physically resisting arrest and then pulled out a handgun and shot Officer Azuar in the head. A third officer who had arrived on scene returned fire and seriously wounded the suspect. Officer Azuar was transported to a local hospital where he was pronounced dead. He had been a canine handler since 1993. Officer Azuar had been employed with the Vallejo Police Department for 21 years, and is survived by his daughter. The suspect was convicted of first degree murder and sentenced to life without the possibility of parole on May 7, 2004.

Officer James Capoot was shot and killed during a foot pursuit of bank robbery suspects following a high-speed chase on November 17, 2011. Officer Capoot pursued the suspect vehicle through a residential area, where he executed a PIT maneuver and disabled the suspect vehicle. He pursued the suspect on foot until he was shot several times while in the back yard of a residence. He was transported to the hospital where he succumbed to his wounds. The suspect was arrested near the scene. Officer Capoot was a U.S. Marine Corps veteran. He had served the Vallejo Police Department for 19 years and had previously served with the California Highway Patrol for two years. He is survived by his wife and three daughters.